I frequently asked “When is the best time to visit Japan?”. So I’d like to answer the quetion. My opnion is based on my life in Kyoto, so North part of Japan or Southern Islands Okinawa might be different.

◆January: If you come to January 1st-3rd, you can see authentic Japanese culture. Our new year celebration is similar to authentic Christmas celebration in North America. Family gathering, go to shine to wish good luck for the new year.

◆Febuary: Cold, but in Kyoto it snow only a few days. Compare to other season, less domestic tourists. But there’s Chinese New Year holiday, so you might see more Chinese tourists in this month.

◆May: Good season. But it’s better to avoide May 2nd-5th. It’s “Golden Week” in Japan. We have a few national holidays in a row, and people travel a lot.

◆June: Early June is ok. But late June, we have “Tsuyu 梅雨” rainy season. Also it’s going to be humid.

◆July: Early July is still rainy season. After rainy season, it’s going to be hot and humid. In Kyoto, we have big traditional festival called “Gion-matsuri” which have 1,110 years history. All days of July, some events related to Gion-matsuri held.
(My last post “Gion Matsuri Festival that has 1,100 years history” https://akarijapanese.wordpress.com/2016/07/27/gion-matsuri-festival-that-has-over-1100-years-history/)

◆August: Hot and humid. In the middle of August we have “Obon” period. People believe our ansester’s spirit come back in this period and spend time with thier original family. So many people go back to their home town, and it’s going to be crowded. Also schools in Japan are holidays in this month, so you’ll see lots of kids.

◆November: It’s getting cold. In Kyoto, you’ll see leaves’ color change beutiful.
And because of that, there is more domestic tourists.

◆December: Cold, but if you don’t mind, you can see Christmas atmospher and traditional Japanese New Year atmospher both.

When I was living Kyoto 2008-2011, I had an impression that only March, April, some festival season in July and August, and October to November are crowded. But recently, after Kyoto selected No. 1 destination on “Travel + Leisure magazine” in 2014 and 2015, almost all the season it’s crowded in  touristic areas, like 清水寺 Kiyomizu-temple, or 金閣寺 Kinkakuji-temple.

But in 2016, Kyoto became No.6 in the award. I personally feel that it is became too crowded in some places. One of the beauty in Kyoto is you can see historical and mordan site, nature and city, silence and lively close each other. But recently it became bit difficult to find places that I can feel peceful silence because of the tourists. For example, “哲学の道 Tetsugaku no michi”, Philosopher’s Path is one of my favorite place. The area has that name because a professor of Kyto university took a walk every day that path to think about Pholosophy. It was quite, peaceful area. But recently I went there, but I feel it’s impossible to think about something seiuos because it’s crouded. If it’s noisy, the place’s charm become less than half.

So I think that Kyoto, we have to think about what kind of tourists we want, and which country to promote. Quality is very important. Do we want bus tour tourists who vist only famous places quick and gone? or indivisual tourists who appreciate our culture, and try to understand and experience it as much as possible?
I often disscuss about this kind of topic with frineds in Kyoto.

It’s just my guess.
I’m wondering if the country name “Canada” related to Japanese “kanata”.
Let me explain why I think so.

I was reading a book. It said,

“The name ‘Canada’ comes from the Huron-Iroquois word ‘kanata’ meaning village or settlement, and the name was used by the early explorer Jacques Cartier. The word Canada started appearing on maps in the 1550s”

When I was in NL, Canada, I visited a museum.
There’s an exhibition about Inuits, the aboriginal people in Canada.
When I saw the exhibition, I was so surprised.
The face, body, hair style, clothes, tools- they look like Ainu, aboriginal people in Hokkaido, Japan.
Inuit or Inu, and Ainu sounds similar, too.
I started wondering if they might have same origin in long time ago.

Because a long time ago, the northern part of Japan connected to eastern part of Russia, and Russia connected to Alaska, and from Alaska people might have migrated to Canada.

A long, long time ago, if people start moving from Japan to “far away” Canada- it makes sense to me.

Imagining these things interests me. 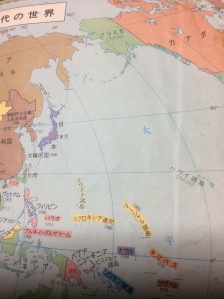 One of my students asked me what kind of music I like. Instead of just answering that I like pop, rock, and jazz music, I sent him Youtube videos. What a convenient era we live in!
This is the list I made. I think you can find some of these music videos on Youtube and other sites.

I have been influenced by Japanese TV dramas.

I’d like to write down some dramas which are popular and my favorite ones.

I hope there’s a Japanese TV drama on demand service that is in several languages, so that I can share these dramas with my friends from overseas.

If you ask young Japanese people, “What is your religion?” They might answer, “I don’t have one.”

They celebrate new years by going to see the first sunrise of the year, then they go to a shrine and pray for happiness in the new year- It’s Shinto.

They also enjoy Halloween, and Christmas as a foreign festival- It’s Christianity.

They celebrate at Shrines, Churches, or Temples, even they don’t actually think they are religious.

But actually, most Japanese people naturally follow traditional customs, which contains the basic ideas of the Shinto and Buddhist faiths.

Shinto is basically the idea of respecting nature. Animism. They believe in the Gods of Sun, Sea, Wind, Kitten and the power of word…, they believe there’s eight million Gods that exist around us. It might make someone angry, but for us, foreign Gods can also a God we can respect, so we’re generous about other people’s Gods.

Shinto is not like other religions. No bible, and no strict rules. It more like a way of living, and the events are based on the seasons. Shinto has long history. “Kojiki” (Records of Ancient Matters), edited 712, “Nihon Shoki” (the Chronicles of Japan), edited 720, so Shinto already existed before this time.

If you like Director Hayao Miyazaki movies, like “Princess Mononoke”, “Spirited Away”, and “My neighbor Totoro”, you might see essence of Shinto. Mind of awe and respect nature. “You can see the Shinto beliefs of respecting nature and the idea of perceiving what Shinto is and not just being taught” Buddism arrived in Japan from India, through China and Korea around 538. After Buddism came to Japan, it kind of mixed with Shinto ideas, and they developed a new school of Buddism. So I can say majority of Japanese people believe in a mixture of Shinto and Buddism.

Christianity is also familiar for them too. For example, there’s many Christian schools in Japan.

Learning languages is fun. You can communicate with people who speak that language. But if you want to know deeply what their basic principles, morals and beliefs are I think it’s a good idea to study about their religion.

I’d like to introduce some Japanese films or TV show that you might find online.
Please check it out!

“Grave of the Fireflies” (movie, must watch)

“Why did you come to Japan” (TV show, interview people who just arrived Narita airport, Tokyo)